Newton, Kansas, Tuesday, November 17, 2020…..Park Aerospace Corp. announced the celebration of the 60th anniversary of its initial public offering, which occurred on November 17, 1960. Park’s IPO was for 175,000 shares of Common Stock, $.10 par value per share, at a price of $4.00 per share, or a total value of $700,000. Park’s Common Stock was originally listed on the American Stock Exchange under the ticker symbol PKE, and the listing was transferred to the New York Stock Exchange on April 25, 1984, where Park’s Common Stock continues to trade to this day under the PKE symbol. (The Company was originally listed under the name “Park Electrochemical Corp.”. The Company changed its name to Park Aerospace Corp. on July 17, 2019.) 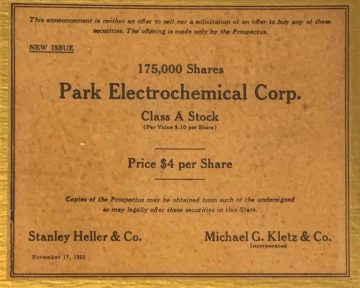 Brian Shore, Park’s Chairman and CEO, said, “To me, our 60 years as a public company have been wonderful years, but I would not say they have been easy years. Over those years, Park has faced many challenges, disappointments and set-backs which were necessary to overcome. But, at Park, we don’t quit. We don’t give up. We are not here just to get by. We are here to fulfill our destiny.”

Brian Shore continued, “Although it has been a long and exciting 60 year journey for Park as a public company, we never forget where we come from. We embrace and cherish our humble beginnings. Park is a strange and unusual Company filled with unusual and special People. We are not like the others. At Park, we play for keeps.”

Brian Shore concluded, “Lastly, I would like to thank the people at the New York Stock Exchange (and the American Stock Exchange before them) for providing a wonderful environment for the trading of our company’s stock over the years.”

Additional corporation information is available on the Company’s web site at www.parkaerospace.com.